This release provides a number of bug fixes as well as new features, including support for Python 3 (as well Python 2) and installation from source on Ubuntu 20.04 LTS as well as Debian 10+.

Please check out additional details on the Mininet 2.3.0 release in the release notes on docs.mininet.org.

How to Get Started

Mininet is an open source project, and we are grateful to our many code contributors, bug reporters, and active users who continue to help make Mininet a useful system with a friendly and helpful community.

We look forward to seeing what you will do to transform and improve the networking world.

We are pleased to announce that our original HotNets paper, A Network in a Laptop: Rapid Prototyping for Software-Defined Networks, has won the ACM SIGCOMM Test of Time Paper Award.

Congratulations to the authors, Bob Lantz, Brandon Heller, and Nick McKeown, and congratulations and thanks to the many researchers, teachers, students, users, collaborators, and project contributors who have used and continue to use Mininet to help usher in the SDN revolution and improve the practice of computer networking!

Congratulations to Alexander Jung, Michał Król and Torsten Runge, who prototyped a Mininet node class for launching unikernels - small application-specific kernel images, basically an application linked with a library OS, ClickOS being one example - and ended up placing in the SIGCOMM 2018 Hackathon!

In their case they used Rumprun as the unikernel system and qemu/kvm to launch it:

They are planning on continuing to work on it, so I hope we can get something simple and useful running and perhaps added to Mininet!

In case you missed it, here is the blog post on Mininet on the Open Networking Foundation web site:

There is an amusing embedded video as well.

We are pleased to announce that Mininet has won the ACM SIGCOMM SOSR Software Systems Award!

“The ACM SIGCOMM SOSR Software Systems Award is given to an individual or an institution to recognize the development of a software system that has had a significant impact on SDN research, implementations, and tools. The impact may be reflected in the widespread adoption of the system, or of its underlying concepts, by the wider SDN community, either in research projects, in the open-source community, or commercially.”

The award also includes an invited talk, and the talk slides may be found here.

The SOSR 2017 program and proceedings may be found here.

Mininet’s ongoing success and impact would not be possible without the support and contributions from the Mininet community, so we’d like to take this opportunity to thank everyone and to say that we look forward to working together to continue to make Mininet a better and more useful system!

Unfortunately, installing the Ubuntu SSH package into a VM image causes default SSH keys to be generated. In the case of the Mininet VM, this means that the VM images for Mininet 2.2.1 and earlier included the same set of default SSH keys (which could leave you open to a MITM attack.) This probably isn’t surprising to many of you, but we’re changing it in the Mininet VM images to avoid this issue.

As of Mininet 2.2.2, we no longer ship default SSH keys in the provided Mininet VM; we remove them before upload, and new SSH keys should be generated the first time you boot a Mininet 2.2.2 VM image.

If you are logging into an older Mininet VM over the internet or another non-secure network, we highly recommend regenerating your SSH keys if you haven’t done so already:

Alternately, you are welcome to download a new Mininet 2.2.2 VM image.

If you’re distributing a VM image for any purpose, we recommend removing any SSH keys before uploading it!

Mininet 2.2.2 is primarily a performance improvement and bug fix release.

Full release notes for this release and previous releases may be found in the Release Notes on docs.mininet.org.

The easiest way to get started with Mininet is to download a VM image.

Download, installation, and upgrade instructions may be found at http://mininet.org/download .

Thanks to all of the contributors of fixes and enhancements for this release, including Olivier Tilmans, Jono Hart, Tomasz Buchert, Rahman Pujianto, Roan Huang, M S Vishwanath Bhat, Brian O’Connor, and others.

Whenever code is pushed to Mininet, Travis CI starts a test job that installs Mininet, runs a simple sanity test, and the “quick” tests for HiFi, the walkthrough, and the example code.

The full results are available on Travis CI’s Mininet page, and the status of the most recent master build is part of the README on Github:

Mininet will continue to be tested in several ways on private servers, but our hope is that having a public-facing CI will give members of the community a better sense of how Mininet is tested and the quality of the codebase. Furthermore, we hope that by automatically testing pull requests, we will reduce the likelihood of merging broken code and reduce the testing burden on maintainers.

Mininet 2.2.1 is primarily a performance improvement and bug fix release.

Additional information for this release and previous releases may be found in the Release Notes on docs.mininet.org.

The easiest way to get started with Mininet is to download a VM image.

Download, installation, and upgrade instructions may be found at http://mininet.org/download .

Thanks to all of the Mininet contributors! A number of interesting features and improvements are already in the works for Mininet 2.3.

Mininet is now easy to install on the Raspberry Pi running Debian/Raspbian 7 Wheezy!

Mininet’s install.sh has been updated so it should simply work:

Here is an example of Mininet running on a Raspberry Pi 2 model B: 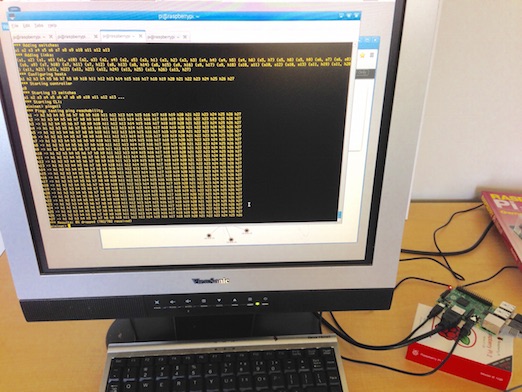 A Raspberry Pi can be used any time you need a cheap network-in-a-box, for example for courses, laboratories, demonstrations, or simple experiments.

We look forward to hearing (on mininet-discuss and elsewhere) about interesting, fun and clever uses of Mininet running on the Pi !!

We are pleased to announce Mininet 2.2.0! This release provides a number of bug fixes as well as several new features, including:

Note that examples contain experimental features which might “graduate” into mainline Mininet in the future, but they should not be considered a stable part of the Mininet API!

How to get it

The easiest way to get started with Mininet is to download a VM image. See http://mininet.org/download for details.

Additional information on the Mininet 2.2.0 release may be found in the release notes and on docs.mininet.org.

Mininet is an open source project, and we are grateful to our many code contributors, bug reporters, and active users who continue to help make Mininet a useful system with a friendly and helpful community!

Materials from our tutorial at SIGCOMM 2014, “Teaching Computer Networking with Mininet”, are available on teaching.mininet.org. The original announcement follows.

We are pleased to announce the immediate availability of Mininet 2.1.0 on mininet.org !

Mininet is a network emulation platform that is intended to be the quickest, easiest, and most enjoyable way to create virtual networks for research, education, and system development. By providing an instant virtual network on your laptop that can run real application, switch, and controller code, Mininet also makes it convenient to get started with SDN and OpenFlow without any additional hardware.

Mininet 2.1.0 provides a number of bug fixes as well as new features, including:

We have provided several new examples (which can easily be imported to provide useful functionality) including:

Note that examples contain experimental features which might “graduate” into mainline Mininet in the future, but they should not be considered a stable part of the Mininet API!

Additional information may be found in the Release Notes.

Mininet is an open source project, and we are grateful to our many code contributors, bug reporters, and active users who continue to help make Mininet a useful system with a friendly and helpful community!

I just want to put in a recommendation for Nick Feamster’s excellent Software Defined Networking course. It’s free on Coursera, and not only does he do a great job of clearly explaining SDN, network virtualization, and related topics, he has also created some excellent videos explaining the usage, design, and rationale for the Mininet system, which is also being used for programming assignments and labs in the course.

There are also interesting interviews with notable people like Martin Casado, David Clark, and Teemu Koponen. It’s quite excellent, very approachable for anyone who has a basic networking background, and highly recommended:

The course has already started, but as of today (Thursday July 11th) you can still sign up for it.

You can easily choose which one you want when you invoke the mn command:

Each of the above examples uses a controller which turns your OVS switches into Ethernet bridges (aka learning switches.)

Note that ovsc is easy to install but only supports 16 switches. You can install the reference controller (patched to support many switches) using install.sh -f. (As of this writing, you can also install NOX Classic using install.sh -x.)

But what do you do if you want another controller like POX? Well, one way is to start up POX (or Beacon, Floodlight, etc.) in another terminal window and then use --controller remote:

If your controller is running locally, you can just use

You might be asking: is there a way for Mininet to automatically start up my controller so that I don’t have to do it manually? The answer is, of course, yes!

The latest Mininet master branch allows you to change the command and arguments for --controller ref to invoke another controller as desired. For example, here’s how you could invoke POX:

cdir: the directory to change to before invoking the controller

command: the command to start your controller

This is much easier than it sounds, and it has worked in Mininet since version 1.0!

With this class saved into pox.py, you can now do the following:

Additionally you can use the custom class in your Mininet scripts:

Note that in this custom class we’ve simply changed __init__, but in a more complicated example you might wish to change the start() and stop() methods as well.

We’re going to France. No, really!

Join us next week, December 10th to 13th at the ACM Conference on Network EXperiments and Technologies, CoNEXT 2012, where Brandon will be presenting our “runnable” paper on Mininet 2.0 “HiFi”:

We look forward to meeting many current, new, and future Mininet users, developers, researchers and contributors!

We are pleased to announce the availability of Mininet 2.0.0!

In the last few years, the Mininet community has grown from a few users at Stanford to an active mailing list with over 500 members in academia, startups, and industry.

Other new features of Mininet 2.0.0 include:

Note that the Topo object has changed somewhat to enable more flexible topology params, and as a result, your old code may need a few changes.

Download and installation instructions are available at http://mininet.github.com/download and Mininet source code may be found at https://github.com/mininet/mininet. We welcome new feature implementations, bug fixes, bug reports, FAQ additions and other contributions, and we look forward to high-quality discussions on mininet-discuss.

Thanks to all the code contributors, bug reporters, and active users who helped make this release possible!

The old website had an obscure, needed-Google-to-find-it address, and was generated server-side, so it could be a bit slow. The new page you’re seeing was built with Octopress and is hosted on GitHub Pages. Since it’s all statically generated pages now, it should load super-quick, and it’ll be easier to add blog entries and do page customization.

Try it out, and let us know what you think!

[Ed.: Apologies for use of the dubious term “website,” rather than the perfectly adequate “web site.” Perhaps you found us via Google or your favorite “searchsite.”]